How to tell
A Load Bearing Wall

The fastest ways to tell if your wall is load bearing or not!

- So you have just bought a house,

or you're walking through a house,

and you wanna make it open-concept.

But can you actually take those walls out?

How do you even know?

By the end of this video,

you will know exactly how to tell

if a wall is load bearing or non load-bearing.

and your insider into the world

of building and re-designing luxury homes.

so that you can get all the new videos

as soon as they come out.

Okay, so here we are onsite

at another luxury flip that we're doin'.

One of the things that a lot of people do

is tearing out walls.

So you get in there and you say,

"You know what, let's just tear out all these walls."

But how do you really know if that wall

can be taken out,

and if you need to take it out,

what do you have to do?

So we're gonna take a walk through

from the bottom up,

and I'll explain all of the concepts

You gotta know the difference

between what actually a load-bearing wall

and a non load-bearing wall is.

A load-bearing wall is a wall

that supports the weight of a floor or a roof above.

They support the weight of floor joists or roof trusses

that are typically running in the opposite direction above.

These are the walls that are holding the house up

and if you take them out,

you have to find a way to support the weight

that they are holding with something else, often a beam.

A non load-bearing wall is a wall that separates rooms

without supporting any of the load or weight

of the roof or floor above it.

If you take these walls out, the house will not be effected.

Most walls that run parallel to the floor joist above

The tough part is differentiating between walls

that run at a 90 degree angle to the floor joists,

because some may be bearing and others may not.

I'll give you three quick ways to figure out

whether your wall is load-bearing or not.

After that, we'll dive into a little deeper stuff

about foundations and why this stuff actually matters.

Okay so one of the easiest ways to figure out

is to look up at the ceiling above

and see which way the joist runs.

So when we look up a bit, we can see this wall

That means that it's coming in at 90 degrees.

If they're running parallel,

that means that the wall is definitely non-load-bearing.

You may have something impeding your ability

to see the joists above you.

If that's the case, we can really look at the structure

or the dimensions of the house.

Like in this one, we are shorter this way

than we are this way.

Typically, that means that our joists

are gonna run the shortest span.

or non-load-bearing is to go outside

and look at your roof.

Now, if we have gable roof, which means that you have a peak

and your wall goes all the way up,

that means your joists run perpendicular to that.

So on a gable roof, we know now which way

the roof trusses go, and typically the structural beam

will run perpendicular to that.

Now we have to understand a little more about

the structure of a house and the foundation

and actually what supports it.

So homes are typically built on piles or footings.

Most of the time, we have large spans in the basement

which means we're gonna have beams in the middle.

Under those beams, we'll see posts.

That's a great indication and a starting point for us

if we need to dive deeper because those quick ways

So we have to start in the basement, so let's go.

Okay so here we are in the basement.

Right now you can see we have a ripped apart basement

so it's quite easy for us.

You can see the span of the room.

Now, the room is wider this way than it is this way

so we kind of look right in the middle

and we can see that our main beam, our structural beam

for the house, is right above us here.

Now another easy way to tell that is we have posts.

We actually have three posts.

You can't see them, but they're covered up by drywall.

If you have one like this in your basement,

and you don't really have to guess anymore what it is.

You may also have open posts

if your basement isn't finished.

These teleposts sit underneath and support the structure.

Underneath here, you'll find that there is a footing

that's supporting the weight of that structure,

that's holding it up.

You need to actually pour

a foundational support underneath these teleposts.

The third telepost is actually hidden inside that wall.

where you're looking for the teleposts

and you can't find them.

Typically, a good home-builder will hide those posts

either next to stairs or in walls

so that they don't stick out like a sore thumb.

So we found our beam, and we're lookin' right at it here.

We can see the joists right above here.

So maybe you might have to cut open to see,

but here it is.

So we know which way our joists run.

Now we're gonna measure how far we are

from one wall or the other so that when we go upstairs,

we can figure out where the beam is right underneath us.

So I'm gonna measure from the outside of this beam

all the way to my exterior wall.

So that when we go upstairs,

we can take the exterior wall upstairs, measure back,

and we'll know what the exact position of our beam.

Okay so we've come back upstairs

and we look at our exterior wall.

This is the one that we measured from.

We're gonna take that measurement from the basement

and stretch it all the way back over here

and we'll find that the beam is directly below this wall.

That means that this wall is structural, or load-bearing.

We might be confused because this wall runs the same way

and the joists run this way, perpendicular to it.

See, you might think that that would be structural,

Okay, so let's say that you got a little ahead of yourself

and you ripped the drywall off of a wall

that you wanted to rip out.

Somebody said hey is that structural or not?

The easiest way for you to figure out which way

the joists are running is to rip that drywall off.

If you don't want to cut a hole, you can use a stud-finder.

If you don't want to use a stud-finder,

you may actually be able to just press on the drywall

and see if you can get any of the screws to pop out.

That'll show you kinda where the joists run.

A third way to find out is actually

to go down to the city archive.

Every town is different.

I don't actually know where your plans for your house are.

Starting about a century ago,

Your plans may actually be in the city archive

that you can get a copy of.

Or maybe you called a builder, and it was a track home,

and they can provide a plan for you.

On those plans it'll say exactly which way the joists run.

And now I'm gonna show you exactly what it looks like

when you take out a structural wall

and what you have to replace it with.

So we have this nice, open-concept dining room now.

When we first bought the house,

there was a wall all the way across here.

That beam that you saw downstairs

is actually underneath my feet.

We wanted to take this wall out.

What we had to do, was we needed an engineer

to design us a beam that would hold the weight

of that structural wall.

So this beam is actually holding up everything above it

and this is two stories and a roof system above

so it had to be pretty big.

And it spans about 20 feet.

So that's why we have this four-ply LBL beam.

when you do take out the wall,

and you put the beam up, there's two points

that actually hold the load.

These beams are gonna hold the entire weight of that load.

That's why we load them up, hammer them together,

that's underneath the beam.

So you can see we have this beautiful

open-concept dining room behind us now,

and also have that open-concept house

that you always wanted.

or share it with someone that you know needs it.

For more information, go to my website at EmmettLeoHomes.com

where you can find pictures of our luxury projects

as well as download our luxury home planning guide. 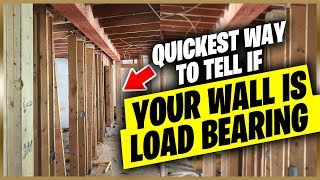 The fastest ways to tell if your wall is load bearing or not! 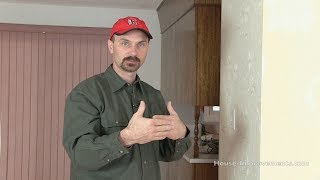 How To Identify if a Wall is Load Bearing or not 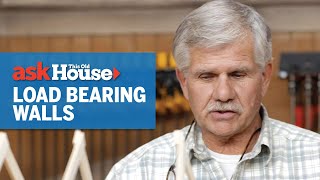 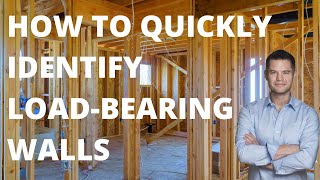 HOW TO IDENTIFY LOAD BEARING WALLS. The fastest ways to tell if you can remove an interior wall. 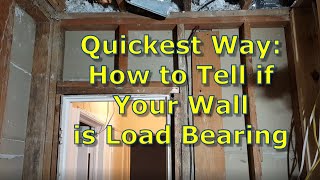 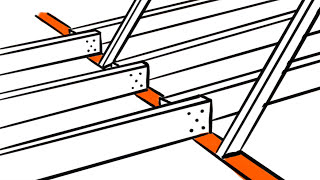 How to Identify a Load Bearing Wall 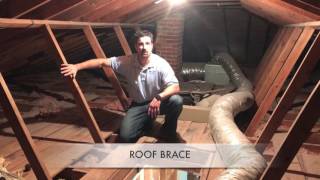 How to Determine if a Wall Is Bearing or Non-Bearing 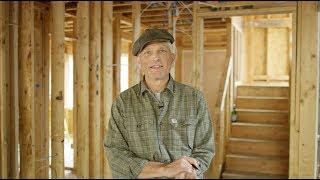 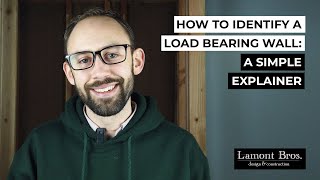 How to Identify a Load Bearing Wall: A Simple Explainer 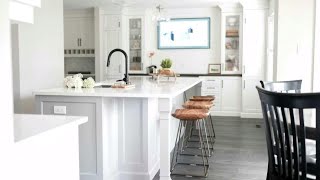