How to roll Lumpia

Hi everyone! Welcome to our Channel! I am going to be showing you how to roll Lumpia.

First we want to make sure that we get the wrappers ready. I like to use these wrappers.

I don't know how long these people have been around

But my mom's been using them for a long time.

Usually these wrappers come in the frozen food section of the different Asian market stores. For these ones

I just put it in the fridge overnight

you start lumpia wrapping just take it out and defrost it, just so you're ready. I usually like to just take out

Some of it and then I put the rest back

Just because if you're working with all of these wrappers

then sometimes if you

Peeled all of them and they're just kind of sitting there

They tend to get dry. And then they're kind of hard to work with. So

Stick these back in the fridge and then you'll just get more as you need more.

So we'll just peel this one because I'm going to show you how to do that differently.

And then I'm gonna go ahead and cut this one. I like to

Cut them into a triangle. We're doing this kind of video just because we realized that with our lumpia

recipe video we kind of highlight wrapping it in 15 seconds. It's informative, but it goes kind of fast.

So we just wanted to spend more time with how to wrap Lumpia.

Kind of have to be like strong but gentle

wrap the lumpia one way. There's not a right way to do it. So just do it

however, your mom or grandma does it but this is how some people do it.

They'll take like a little bit of a spoon. That's kind of a huge spoon. This is a serving spoon.

But any spoon. And then you just start spreading it out and then there's not really a right amount

like a thickness, it's kind of your personal preference. I know if I put too little meat growing up, my mom would always say

Nicole this is not for business so you can put more meat.

But you also don't want to make it too thick either because you're gonna freeze them or you can fry them right away, whatever but

You'll get used to the feeling of raw meat in your finger nails.

And then you roll and then you want to make it so that you're rolling it tight,

but not too tight.

So you want to make sure there's no like air pockets in there and then you just keep rolling and then this is my...

it's not really an egg wash. It's just a scrambled egg. That's what I like to use to seal my lumpia. My mom usually

prepares like a corn starch paste which is corn starch and water, that she heats up over the stove.

So that's one thing you can do and then just roll it roll it. Well that looks pretty.

So there is one. You could just you know

fry them up all along like this, or you can take it and you can cut it into pieces

Or cut it in half and then we're gonna put it here. I

forgot to tell you guys, um

So usually when I separate these wrappers, I don't know if this really does anything

But my mom taught me to cover them while they're just sitting there.

Just so that they cannot dry out as fast. Now, I'm going to show you my preferred method

Wilton piping bags. This is how my mom taught me how to roll lumpia and

it's just a lot faster. And then all of your lumpia kind of is the same size, which is kind of nice.

Usually I pick the ring finger because that's about the size of lumpia that I like and then I just start cutting the tip.

Just gonna cut. You might have to trim it a few times.

You just keep snipping. It's about the size of my index finger knuckle

which is perfect so you want to shovel some of that meat in here.

so you don't waste the meat and

it's about as thick as I want it to be. Then as

you probably seen in our other video, I like to lay these out so you start from the bottom.

And then you kind of lay them out

overlapping each other like a Christmas tree. I usually like to do about five at a time.

Okay, and then I just start from the top and I work my way down or you could do the bottom up doesn't really matter.

And then you bring the corners together.

Just because I like to close the ends and then it's kind of the same method.

You want to make sure that it's tight enough where there's not air bubbles or anything, but you're kind of tender about it.

And then you take some egg.

How many of you guys actually just use water and does it work? Let's put it next to the extra long one.

I don't know if you notice but my

tray is lined with saran wrap because we're gonna plan to freeze it and I don't want them stuck to the tray.

And then when I place them down on the tray the little tail, I always

They look a little funny at first we just keep doing this for like an hour or two.

We're done with our first layer

they will get stuck to each other. You also want to make sure they're not actually like squished together touching

So we're gonna go ahead and put these ones right in between.

When ever I fry a refill, there's gonna be air bubbles in here

So you do want to try and like prime your bag a little bit.

It's so nice to have extra Lumpia in the fridge, then when people stop by you're ready.

You just have to throw them into the fryer. Oh, I have a pro tip, after they're frozen,

Don't thaw them just directly from the freezer throw them into hot oil. Don't throw it. Place it gently.

Into hot oil. The reason why you want to do that is when you thaw them out they get all wrinkly and soggy

looking and then they're just, it's not very presentable.

But if you throw them in directly from the freezer, they stay like straight.

You know, what I'm talking about? This is the last one. Feels good. Yaaay.

There you go. Gonna saran wrap this.

completely frozen take them out a day later,

I put them into freezer bags.

But I don't put them into freezer bags right away because they're still soft and so they'll get all like like, you know.

then you can just put it into like a smaller container and just stack them with saran wrap in between. So

here it is. I'm gonna put it in the freezer now.

So, after you freeze the lumpia overnight you want to

Now you're just going to be ready for when family just drops by.

Thanks for watching our video and if you guys have any other tips or tricks on rolling lumpia,

then let us know in the comments below and

if you guys are new here and like what you saw then give us a thumbs up and subscribe! 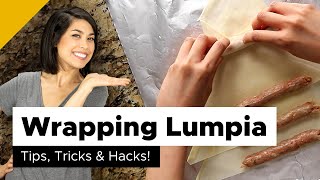 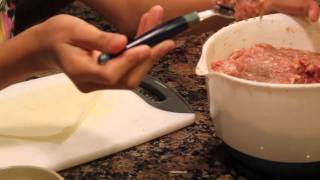 The Art of Correctly Wrapping a Lumpia (Filipino Eggroll) 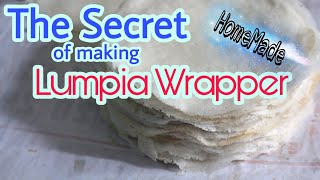 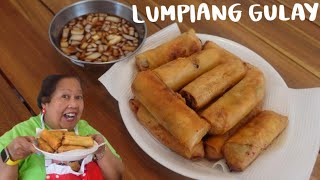 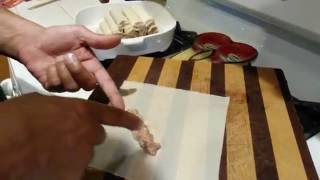 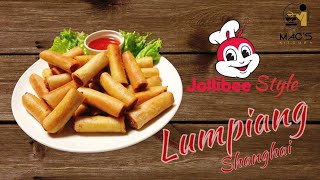 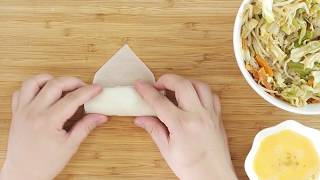 HOW TO WRAP AND FREEZE SPRING ROLLS 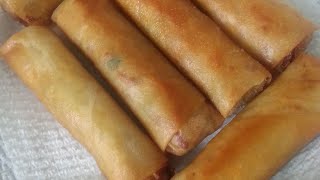 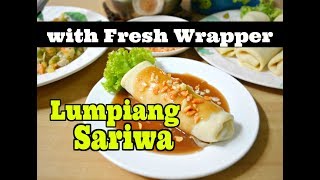 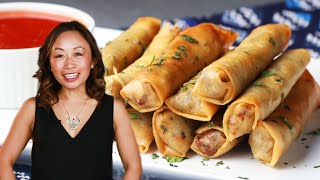