How to play the
F Chord On Guitar

Now, every single person I've ever taught to play guitar,

in all the years I've been teaching, has struggled with this chord.

It's almost a bit of a rite of passage:

if you're going to play guitar,

you have to struggle your way through playing F chord.

But you learn loads in the process:

your fingers develop loads of kind of better techniques

and strength and flexibility and it's something, you can't avoid it

Now what I am going to show you,

is a few different ways of playing an F chord.

Now the first one, which is really the one that I kind of recommend,

is going to be the F barre chord.

Now, there are smaller ways of doing it, which are easier,

and, for some people, are a better way of doing it.

But I've been really experiencing a lot of progress

with students that I'm just throwing straight in the deep end and going :

"try this barre chord". And I think it works.

About 70% of the time, people just get it

and then they got the big chord from then on. Which is great.

For those of you that struggle or if you're young

you might not be able to play the first big F chord that I'll show you.

And you might have to resort to one of the other two.

But that's okay. You use those other two as well.

I still use the little two as well. It's not just like:

and the other ones never get used.

They all get used,

just the big barre chord one is the toughest one.

So here's our little F chord. And this is an F barre chord,

because this first finger here is creating a barre

and pressing down all of the strings.

We do have , of course, fingers in front of the barre,

which enable us to play our F chord.

And the way to think of this chord that you're playing,

is it's really kind of an E chord,

but your first finger is replacing the nut.

now if I play the same dots of the E chord

and little finger goes where third finger was.

We still got an E.

it sounds the same, but it's now using different fingers.

If we slide that up a fret and put our first finger down,

we end up with an F barre chord. Now, this is difficult

because of how much pressure you have to do here

between your thumb and your first finger

in order to hold that finger down and press all of the notes.

It is a tough chord. There's no doubt about it.

It also helps if you think your first finger is kind of pressing in a bit sideways.

It's not really the flat of the finger, it's really the kind of the angled edge.

So, it's this little kind of that part of your finger that does the pressing.

It's not the fleshy part down here, because that's too soft.

We're after this little edge part, which is really hard.

So, when it's on your chord there, it's nice and tight and I can really lock in.

The thing to do with it, if you're going to try this F is :

have a bit of a go at it, maybe you try it for a week,

pick out the notes one at a time

See if you can get most of the notes ringing out

and if you can, if you can get say, three out of the six ringing out clearly,

then you want to persevere probably with trying to do this version of the F chord.

The hardest notes to do are these thinest two strings,

is getting the barre down enough

to work on those two.

Now, if you really want to persevere with this one,

you might want to go and check out the videos

I've got on playing barre chords as well,

just because those videos go for twenty minutes or something

and there's a lot more information than I can go through here, on playing the barre.

Because only a certain percentage of you are going to be able to do this barre chord F.

So those of you that don't want to do this one

or find the barre chord a little bit too full on,

you might want to go to this second version which I call "Old School".

And in this version, we've taken away the note from the thickest string.

So we're no longer having to do a big barre,

but we do have to do a little barre here with the first finger, which is covering two strings.

So instead of being the point,

like we have been for all of our chords so far, or most of the chords,

we're doing a little barre. Much like that A mini barre we looked at.

And we're just trying to think of keeping that knuckle forward too.

Then the other fingers are in the same position as they were for the other F chord.

and first finger down.

For most people, they find it easier to do it that way.

and then try and get that barre down. It does feel a little bit awkward.

Most people struggle with this chord.

Not normally as much as the big barre chord F, but it's still a little difficult.

the third finger is muting that sixth string.

It only just has to touch the sixth string lightly, and

we still got ourselves a pretty nice F chord.

Of course we haven't got an F bass note on this chord,

but it sounds pretty cool

and this is the one used a lot in the kind of the old school.

Now if that's still, you're finding that a little bit too big,

you can also do this third version, which I call the small F, which is:

and we just have the third finger here, on the thinner string.

So, if you remember back to our Fmaj7 chord,

which looked like this, very nice, simple little chord.

And all we have to do is: lay the first finger,

lift it up and put it down flat so it covers the thinnest two strings.

And we have now our F chord, which is kind of an F mini chord if you like.

Now, and this is a very common, cool way of playing F chord for beginners.

You can still need a little bit of strength there with the thumb in the back.

Now, there's a more advanced version of this one as well,

where you can actually wrap whole hand around

and bring your thumb over the top here,

to play the bass note with your thumb.

Now, I definitely, definitely don't recommend you doing that one for now.

That one's pretty tough. But just in case you see other people,

I very often play the barre chord F like this

instead of playing barre chord F like that. So, just be aware of it,

until you're well into your intermediate kind of level guitar stuff.

Not as a beginner.

You've got there three different ways to play F.

It is a tough little cookie as I said. Everyone struggles with it, including me.

I had a horrible time with F chord when I learned it.

In fact, I struggled with G chord as well,

which most of my students don't seem to. But I found G really hard.

So, don't be one of those guys like me,

that runs around looking for songs that don't have F or G in it. That's not cool.

Just face up to it, get in there and practice it.

Because it is only practice that's going to make it better.

Your hand is going to hurt a little bit, particularly this muscle in here,

between your thumb and your first finger.

This is the muscle that has to get the biggest workout from your barres.

It is a bit tough, just takes practice. Just like going to the gym or whatever.

Every time you're doing it, you're making that muscle work a little bit harder

and it gets a little bit stronger. So, that's F.

This is a really, really important part of this stage.

There is another important part as well.

Like I said earlier: this is an important stage. You've got an F chord

and you're going to learn to use ties as well, which is a strumming technique.

So, lots of practice on your F chord.

And I'm going to see you in a very short leave,

for some one minute changes involving F. 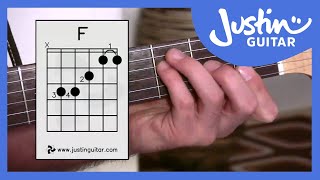 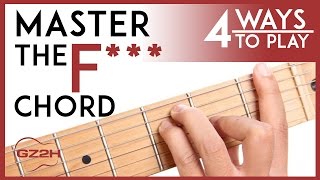 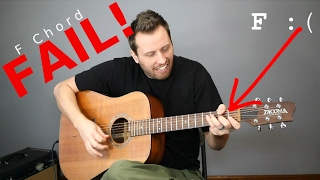 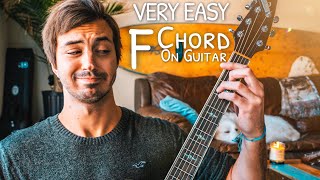 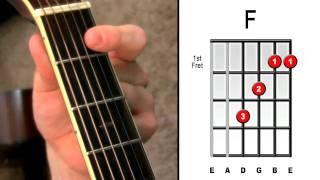 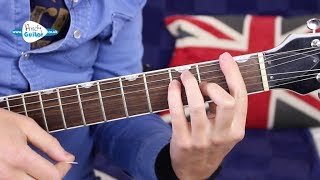 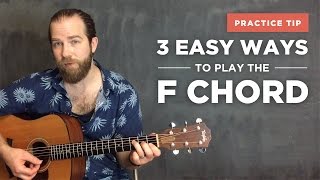 3 Easy Ways to Play the F Chord on Guitar 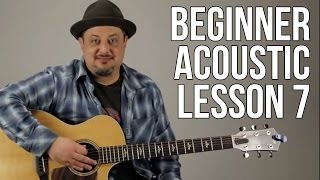 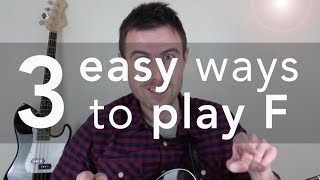 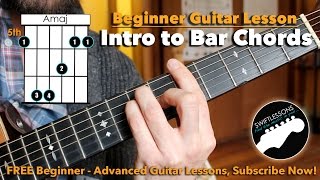 How to REALLY Play Bar Chords - A Beginner Guitar Tutorial