How to play the
B Chord On Acoustic Guitar

Hi there. I am Thomas Michaud. I have had over the years a number of students have asked

me if there is any easy way to make a B chord. The short answer is yes and no. What I mean

by that is it�s often difficult for beginning students to make a B chord. However, there

are some easier forms and some harder forms. I am going to show you three forms of the

B chord today and you choose which one you want to start off with. Start with easier

one and go to the more difficult. Let�s get going.

Here we are your first form of the B chords. We are going to use four fingers. Looks like

this. Take a close look. I have got my first finger on the first string, my second finger

stretching over to the fourth string, then each of my third and fourth fingers, my pinky

next to it. Try it with me. First finger, second fret, first string, stretch

over with your second finger. That�s the hardest one. It�s a stretch over to the

fourth string, fourth fret. Next to it on the third string go ahead and place your third

fourth fret. Reaching your second, third and fourth fingers are in a line, as close to

a line as you can get, like in the appropriate line.

Just so the notes sound. It�s all that matters. Even if they are really angled as long as

they sound, it�s fine. I know it�s a bit of a stretch but you will get used to it.

Take your fingers off, shake it out and try it again. First finger down, try this. Put

all three of your fingers together. Try placing them all down at the same time. Just experiment.

For some people, that�s easier and really when you get good at it, all fingers go pretty

much at the same time. That�s your first form. Let�s go on to the second form.

Here we are. This one you are going to place your first finger over on the fifth string,

second fret. Now your other three fingers down in the same place, fourth fret. That�s

the fourth string, third string and second string. I won�t go back through that. We

did that in the first chord. You can review that if you need to. Here�s the trick. Your

first finger goes down so that it covers the first string also. If you are really making

a little bar, partial bar, it goes all the way across. That�s what it should sound

like. This is actually a better sounding cord for

many purposes because you have got the low base note there. That�s the B in the base

on the fifth string. Take your fingers off, shake it and give it a try with me. First

finger down, fifth string, second fret. Try placing all three fingers down together. If

next to it; fourth fret also. That�s the third string and then your second string pinky

down, fourth fret. Then lower your whole first finger towards

bars across. Now here�s what it sounds like for most beginners. That first string deads

out. It�s hard. Practice will do it. Lower the first finger and give it enough pressure

to make it sound clear. Don�t feel bad if at first it doesn�t sound good. Even if

it does dead out, it still sounds good. Don�t worry about it too much. Better to use it

and then tweak it as you get better. Let�s go on to the third form.

Now this third form is a little bit about rock and roll form. We are going to put our

first finger down in the same place, you are barring across the first five strings. I will

three fingers down you take your third finger and you bar, a little partial bar across the

fourth string, third string, and second string. That�s what it sounds like. You are hitting

the same strings but you are covering all three strings with your third finger. Little

partial bar, see my knuckle�s up in the air. My knuckle on the third string is collapsed

there and the second knuckle is up in the air.

I am really covering the strings with the top of my third finger. The common form for

electric guitar players. I actually use it quite a bit [inaudible 00:04:50] the guitar.

Try it with me just for fun. Put your first finger down. This time instead of starting

with just the fifth string, let�s just go ahead and try placing it down on all five

strings. You are making a partial bar. You are covering all five strings. Check and see

if they all sound. If not, adjust it. If your finger is too much on the fret, they will

dead out and if it�s too far back a buzz like that. Are you ready?

you are covering the third and the second string. This one is pretty difficult to get

that first finger to sound, but it is doable. Just don�t worry about it. Tweak it as you

progress. I am talking over time, maybe even months. Still softer even if that first string

is dead out. Take your hand, relax. Okay that�s it for the three ways to make the B Chord.

I have one more little thing I want to throw in just for today, just for fun. There is

one other B Chord I often use. It is harder but I just want to show it to you today. It

looks like the F chord in terms of a form but is up on the seventh fret. That�s B.

That�s a partial bar B and here�s the full bar B. I can use that a lot when I want

to move around the neck. That�s the seventh fret B, partial bar, press the partial bar

F, full bar. If you want, give it a shot. Again it looks just like the F but you move

it all the way up to seventh fret. Thanks for joining me today. I look forward

to seeing you on another video. You take care. 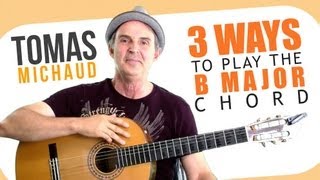 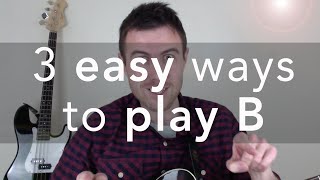 B Guitar Chord - 3 Easy Ways To Play This Tough Chord 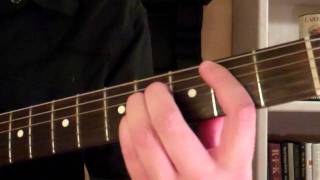 How To Play the B Chord On Guitar 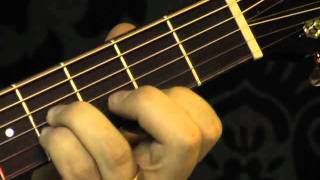 How to play a B chord, with Andy Schiller of BeyondGuitar.com 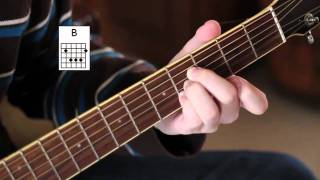 How to play the "B chord" - Easy Beginner Guitar Lessons (w/ demonstration)! 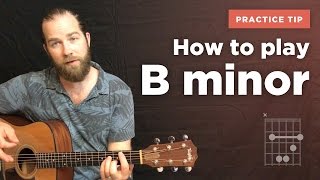 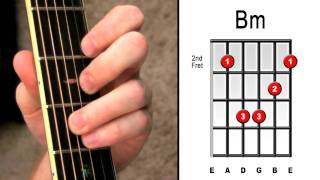 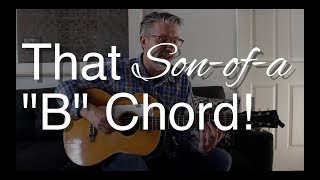 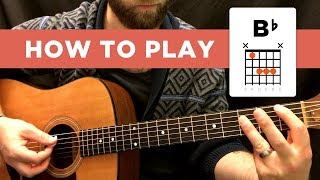 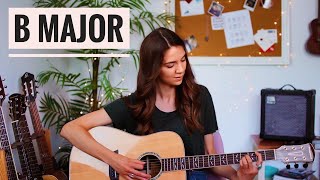