How to name Planes

Today I'm going to teach you how to name Geometric  Figures, specifically Point line and Plane. A point

is very easy to name they just assign a letter to it. There's point A, there's point B very simple,

but a line is a set of points that is  going in opposite directions. Now there's

or you could use a little symbol on top of there, the order doesn't matter it could be BA, AC, CA

BC or AB, any two points, don't use three, don't use one. What about line segments. Well segment

is just a part of a line it, doesn't keep going on forever, so there's no little arrows. Now this

and again the order doesn't matter so it could be BA, but you have to name it with those end points.

Now that's going to BC, or CB those  two endpoints or the whole line segment

could be AC or CA, just use the end points. Planes can be a little more complicated.

Now here we're going to have a plane, a set of points making up a two-dimensional surface and

see that R right there does not represent a point, we can name the entire plane plane R. It's going

to be cursive if they're going to do that, you  could also use any three non-co-linear points

but again the order doesn't matter it could be BAC, or CBA, no big deal. Let's go ahead and try again.

Now this plane could be named plane M, but it also has five little points on there we're going to

use those, go ahead and name it, again that's plane M, here what can we name the plane if all

the arrangements, all the different orders of the same three letters are treated as one name. Well

let's go ahead and just go in order, let's go PQR, it could be named plane PQR just use the symbol

but I'm gonna write all the ways that you could  start with just the letter P and I'll go in order,

so we'll go PQS and then PQT, well that's all the ones with PQ so I go to R, PRS

and PRT, using that order makes it much simpler. Well I'm done with R, I move on to S, PST, those

going in order, I'll go QRS and then QRT and then go with the S, I'm done with the R go QST,

with R, if I'm still going in order well, I only have the S and the T left, so so if you go in order

you can find all the different combinations, so now let's get back to that idea of three non-co-linear

points. Why can't I name this plane ABC, well the reason for that, they make a straight line and

you can draw a lot of different planes, an infinite number of planes that will also go through ABC.

through it that's ABC, it wouldn't make any sense, so always pick three non-collinear points

and remember that N and M are not points and you have to use three, not four, not two points. 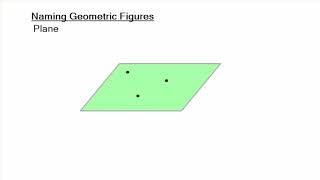 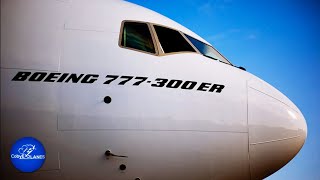 How Are Planes Named? 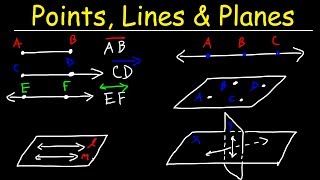 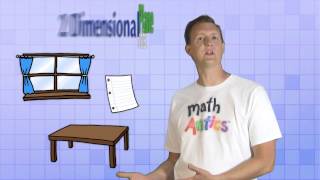 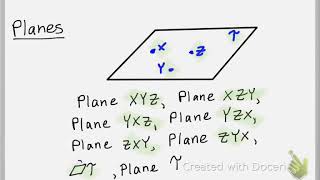 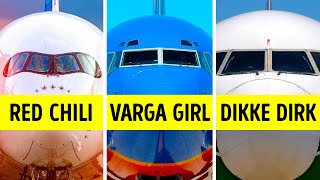 Why Some Planes Get Strange Names 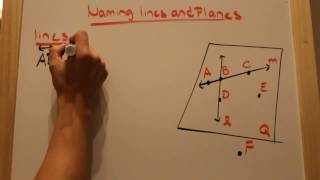 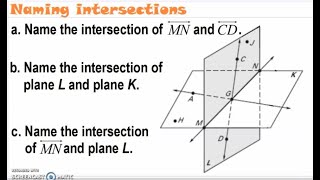 Naming intersections of lines and planes 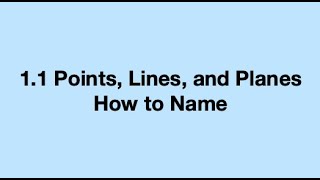 1 1 Points, Lines, and Planes How to Name