How to name
Oxoacids

We’ve learned how to name certain ionic and covalent compounds, but let’s get a

little more specific and learn how to name a class of compounds called oxyacids.

We already know that binary acids are ones that contain hydrogen and one other element,

like hydrochloric acid, but there are also acids that contain hydrogen, oxygen, and at

least one other element, and we call these oxyacids.

Beyond this elemental breakdown, in order to qualify as an oxyacid, the atoms also must

be bonded in such a way so as to produce acidic properties.

Usually, this involves one or more hydrogen atoms combined with an oxygen-containing polyatomic

So let’s look at the various polyatomic ions we can use to build oxyacids.

This is NO3 minus.

We can add a hydrogen ion, or proton, to the nitrate to get HNO3, which is an oxyacid,

as we can see the hydrogen, the oxygen, and the other element, in this case nitrogen.

The nitrate ion is very stable, so its conjugate acid is indeed rather acidic, since the strength

of an acid is proportional to the stability of its conjugate base.

To name this acid, we follow a few simple steps.

First, we begin with the name of the anion, in this case, nitrate.

So from this we could make sodium nitrate, or potassium nitrate.

But if this becomes an acid, we will change the suffix of the anion.

So this will become nitric.

And then we add the word acid.

So this will be called nitric acid.

If instead, we are looking at HNO2, we know this stems from the nitrite ion, which is

The suffix “ite” will become “ous”, so this is nitrous acid.

If an element can only be involved in two types of oxyacids, one with more oxygen atoms

and one with less, these suffixes will allow us to distinguish between them.

But certain elements can generate more than two possibilities, and there are prefixes

and suffixes to describe any number of oxygen atoms in the respective anion.

Let’s say there are four possibilities for the number of oxygen atoms in an oxyacid,

We know that ClO3 minus is the chlorate ion, and ClO2 minus, with one fewer oxygens, will

be the chlorite ion.

If we want to specify that there is one less oxygen than that, we will use the prefix “hypo”,

so ClO minus is the hypochlorite ion, and if we want to say that there is one more oxygen

than in the chlorate ion we will use the prefix “per”, so ClO4 minus will be the perchlorate

When naming oxyacids containing these anions, we use these new prefixes we just discussed,

and the suffixes will change according to the rules we already know.

Here is a list of common oxyacids, and we should be able to see the polyatomic acids

they are derived from.

Note that we do not need to specify the number of hydrogen atoms, as that is implied by the

common charge of the anion involved.

Most of these follow the rules precisely, but there are a few exceptions.

For example, we will say sulfuric acid rather than sulfic acid, but the specific prefixes

Some of these oxyacids are monoprotic, and some are polyprotic, but all contain hydrogen,

oxygen, and at least one other element.

And now that’s a few more molecules that we know how to name. Let's check comprehension. 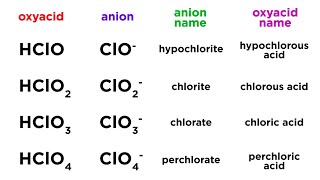 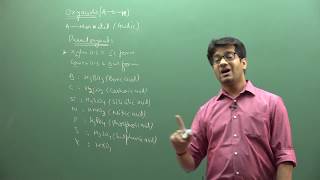 Naming of Oxyacids by SG Sir 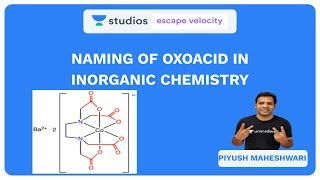 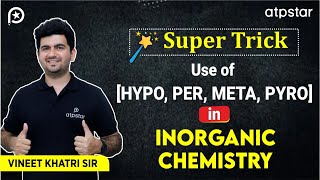 Super Trick to Use Hypo,per,meta,pyro in Inorganic chemistry- IIT JEE Concepts in Hindi 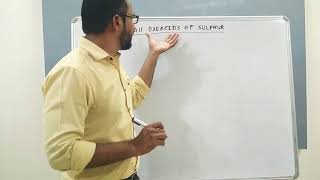 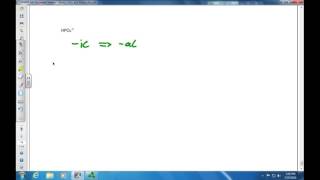 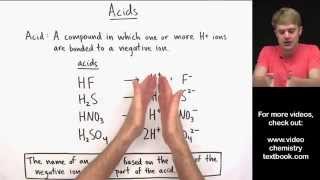 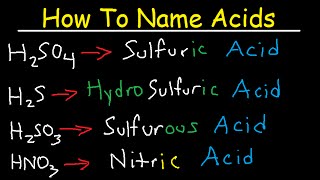 How To Name Acids - The Fast & Easy Way! 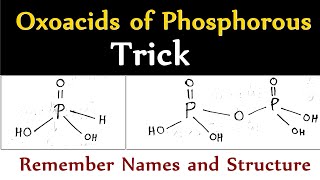 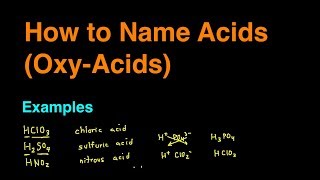