How to listen
Native English Speaker

In this lesson, you can learn how to understand native speakers in English.

Many English learners find it difficult to understand native speakers, even after years

This can be frustrating and demotivating!

However, there are some simple things you can do to improve your English listening and

In this lesson, you’ll see five simple tips you can use to understand native English speakers

Look at this sentence:

I am from France.

Imagine you’re talking to someone.

How would you say it?

Would you say this sentence with the contraction?

Or would you say the full form?

I am from France.

Now, think about these sentences:

He has already told me.

They will not be here until tomorrow.

All of these sentences can be contracted.

Can you see how?

They won’t be here until tomorrow.

Would you pronounce the contractions, or not?

Think about it, and be honest—it’s not a test!

Many English learners don’t use enough contractions when they speak.

They use the full form, for example he has instead of he’s.

If you don’t use contractions when you speak, it will be difficult to understand them when

Why is this a problem?

If you find it difficult to understand contractions, you’ll always have problems when you’re

So what’s the solution?

Very simple: use contractions more in your speech.

To do this, choose a simple topic—for example, your family—and record yourself speaking

Listen to the recording and try to find any places where you could have used contractions,

Then, repeat the exercise, and try to use more contractions.

Then, try again with a different topic.

If you use contractions yourself, it’ll become easier to understand them.

First of all, the letter ‘t’ in the word what is usually not pronounced.

Secondly, the word are is not pronounced /ɑː/.

It changes to a very short sound: /ə/.

Next, the word you is not pronounced /jʊː/.

Finally, the words are not pronounced with spaces in between.

The whole question is pronounced like one long word.

So, the question which is written:

What are you doing?

and so on, you’ll expect to hear:

What are you doing?

And of course, you probably won’t understand the natural pronunciation:

What can you do about this?

One: learn about weak forms.

Weak forms are words which have a different pronunciation in a sentence.

Learning about weak forms can show you that there is some logic to English pronunciation,

Don’t think about what you read in your English textbook.

Listen to how people pronounce words and sentences in real life.

You’ll realize that there’s a big difference between textbook English and natural English.

Another good exercise here is dictation: choose something to listen to, like a podcast or

Listen to one minute, and try to write down everything you hear.

Pause as often as you need to.

This way, you can train yourself to follow native English speech.

Look at a question with a word missing.

If you’re an average English student, you said that the missing word is are.

That’s the correct answer, but it’s also not the best answer.

How can the correct answer not be the best answer?

What are we talking about?

Actually, the best answer is that there are no words missing.

You can just say,

In spoken English, you don’t need to say are.

In fact, you can make the question even shorter and just say,

Native speakers very often leave out words like this.

Again, if you’re expecting to hear a full question, these shorter questions can be confusing.

So when can you leave words out like this?

In yes/no questions which have the word you, it’s often possible to make the question

Do you want to come?

All of these questions can be shortened:

You finished? or Finished?

You going? or Going?

So, what should you do?

Try to use these shortened questions when you speak.

Like all of this advice, you need to use it yourself.

If you use it when you speak, it’ll be easier for you to understand others who speak in

Remember that native speakers very often shorten questions like this.

To answer our question: no, you do not need to hear and understand every word to understand

Imagine that you are in the kitchen with your friend, who is cooking something.

Your friend asks you a question, and you hear:

Can you (mumble mumble)?

Okay, so you didn’t hear or understand the full question.

But that’s often not a problem.

First of all, you heard the words can you.

So you know that your friend wants you to do something.

Secondly, you’re in the kitchen, cooking.

Whatever your friend wants, it’s almost certainly connected to that.

Probably, your friend needs you to help with something, or give them something.

By using the context, you can often understand someone without hearing every word.

But, but, but, you say, that’s not really understanding native speakers!

I want to understand native speakers, not guess what they mean.

Actually, native speakers do this too.

You probably do it in your own language, so there’s no reason not to do it in English.

Don’t think: “I don’t know the word, so I can’t understand the sentence.”

And, if none of this works, use another simple trick: ask!

Again, native speakers do this all the time.

There’s no reason you shouldn’t do it, too.

Often, English learners are afraid to ask someone to repeat something, or to admit they

Remember: no one understands everything everyone says, and it’s completely natural to ask

someone to say something again.

Here’s a question: what does ‘native English’ sound like?

Here’s another question: do you prefer the sound of British English, or American English?

Actually, those are both terrible questions, which make no sense.

Do you know why?

The reason these are bad questions is: there’s no such thing as ‘British English’.

If you think about ‘British English’, you probably imagine someone speaking like

But most British people don’t sound anything like that.

It’s the same for American English: people from different places and different backgrounds

will speak in different ways.

Then, of course, there are many other countries where English is officially the first language:

Africa, Singapore, and many more.

The world of English is much bigger than just the UK and the US, and you’ll be a better

English speaker (and listener) if you realise this.

Unfortunately, many English learners react negatively when they hear a native speaker

speaking in a way that they’re not used to.

(or: “I prefer American English.”)

But, here’s the thing: in a real-life situation, like a job interview, a meeting, or a party,

It’s your responsibility to understand them and communicate with them; they aren’t going

to change how they talk for you.

So, what can you do about this?

Don’t just listen to one kind of English.

If you love the sound of ‘classical’ British English, then fine, but listen to other voices,

You can train yourself to understand almost anything, but you need time and practice.

Listen to a range of voices and accents regularly, and you’ll be able to understand more of

what native speakers say to you.

Before we finish, we have a question for you: in which situations do you find it most difficult

Please let us know in the comments.

You can find more of our free English lessons on our website: Oxford Online English dot 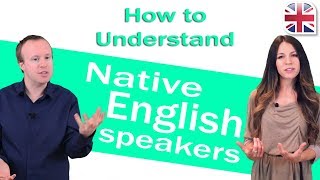 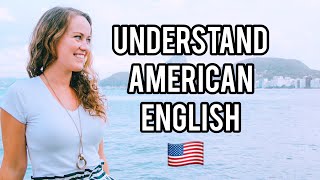 Why You Can't Understand Some Native English Speakers 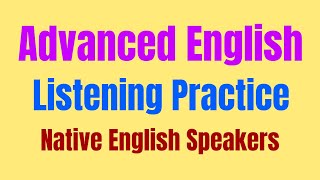 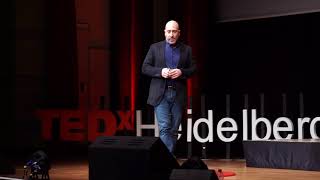 How to Talk Like a Native Speaker | Marc Green | TEDxHeidelberg 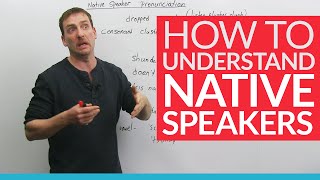 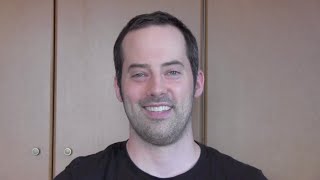 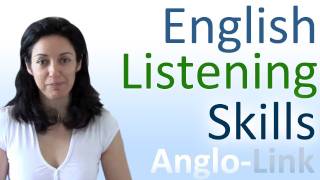 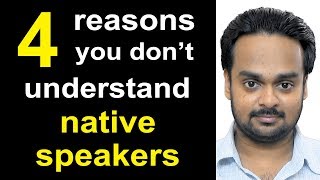 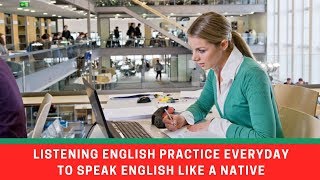 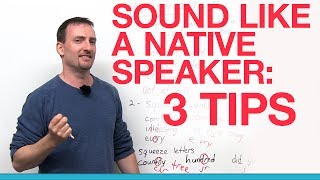