How To Help Child Overcome Fear

showing you how I might talk to a child about fear and how to overcome it. I

think the first important thing we need to do is teach our children about fear.

--What it is. And this is based in your brains fight-or-flight response. This is

a natural mechanism that's built in. So, if I'm talking to a child, I might say,

"You know what? Your brain is amazing and it's in charge of everything. It's in

you do. It's like your brain is in charge of everything that's going on. And one of

its jobs is to keep you safe. Now, this is good. Your brain loves you. It doesn't

want you to be in danger. So, if it thinks you're in danger, it's

going to jump in and try to take care of you. How does it do that? Well, your brain

has some special things built in that makes it possible for you to stay safe."

For example... And you can use this very example with your kids or come up with

one that's similar to it that they might be more familiar with. What if we're out

we're having a great time and then suddenly, a big ole bear comes out from

behind a tree? Wants to rip your face off or eat you for lunch. I'm sorry. Did I

scare you? Well, just imagine it. Well, what happened to your heart? Oh, wow. It would

start beating and pounding. And usually you can't even feel your heart. But when

you're really scared, you can. And your breathing rapid shallow like this.

Well, that's because your brain doesn't want you to be somebody's lunch. So, it

kicks in and it sends a little signal to glands in your body. Glands are just

little parts of your body that make and store chemicals for you. It's like it's

just holding it. "I made this for you. In case you need it, let me know." And those

chemicals are just sitting there waiting. Well when you're in danger, the brain

says, "Hey, we need those chemicals. And that gland says, "Oh, great. Got some for

you right here." Squirt. And it squirts it right into your bloodstream. That

chemical goes to every part of your body. When it hits your heart, causes it to

start beating hard and fast. These are chemicals that prepare your body to get

you out of danger. It's kind of like the powerup that you get on a little video

game. Oh! Now I'm powered up. And that gives me the ability to either run away

or put up my dukes and fight because you want to be safe and your brain loves you.

Doesn't want you to be eaten for lunch. Can you tell when I'm talking to

children, I want to join them on their level and so you want to be a little

animated about it. Have some fun be playful with it. This helps to secure

them too. Because they kind of understand that you get it.

that's built into kids. You've got one too. And your fight-or-flight response

gets triggered all the time as well. Chemicals come into your body. Now, just

as an acknowledgement: I don't necessarily have to tell the kids this.

Okay? But as a parent, I want you to understand that these chemicals have a

half-life. Half-life just is a chemical term for how long does it take for

metabolized. When these chemicals hit the system, it can take a little while for

them to dissipate. Not a long time, because the chemicals involved with the

fight-or-flight response are fairly short acting and have a short half-life.

But it's going to take a little time. So, it's not helpful to just tell our kids,

"Hey, don't be afraid." Because they've already been triggered. The heart is

They've got a physiological response to a chemical. So, give them a moment, okay?

And sometimes it's gonna take 30 seconds, a minute, maybe a minute and a half or

2 for them to calm down a little bit. And there's a practice that I'll share

with you in just a minute. The next thing we want to teach the kids is the

difference between a real threat and a perceived threat. Because the limbic

system, the fight-or-flight response that's being driven in your body can't

and a threat that is perceived. Good example, you go to the movies. It starts

to get a little intense up on the screen, what do you notice? Your heart starts

beating a little faster. Maybe you're gripping those arm rests a little more

tightly, right? Is it a real threat are you in danger?

No. Does your limbic system know that in your brain? No. It can't tell the

difference and so it kicks you into fight-or-flight either way. So, the next

school. Some kids have a fear of going to school or they're really in danger. No.

Not particularly. Are there risks? Yes. That's the topic of

another video. And incidentally if you want more information about fear and

anxiety generally, click on that video next which will queue up the video for

you to watch it after this one. And you'll get a little more comprehensive

look at the whole fear and anxiety thing. Go back to what we were talking about.

What's a real threat? What's a perceived threat? So, you could just simply have

some conversations with your child about... Okay, how about answering the door. Real

threat? Perceived threat? How about getting up on time for school? And some

of these they'll be like, "What? That's not a threat. You're right. Now, your limbic

system might not know that, okay? How about getting on the ride at the

amusement park. Now, this one's interesting because the rides trigger

our fight-or-flight response. Doesn't mean that you're in danger. So,

about like the roller coaster, for example. Are you really in danger getting

on the roller coaster? Not really. They have very stringent

safety guidelines. It's more dangerous to drive to the amusement park than it is

to get on the roller coaster. So, we want to have that conversation with our kids.

Discerning between a real threat and a perceived threat. As a follow-up thought

to that last idea, teaching the difference between a real threat and a

perceived threat. Remind your child that their brain is sometimes going to play

tricks on them. And the best way to understand this is through media. When

you're watching a movie, are you in danger? No. Do you feel scared? Sometimes.

Why? Because your brains playing tricks on you. You're safe but your brain

doesn't know that. Now, when we get triggered, remember the chemicals have a

half-life. They have a very physiological effect. So, we want to next teach

self-soothing. How are we going to calm down that chemical response? And the

quickest way I know is breathing. I don't suggest that you try to do this with

your child when they're feeling flooded. When they're all worked up or upset. I'm

talking about practicing this beforehand. And the breathing practice that I like

full. And you do this with them, okay? And then just hold for a few seconds. Just to

have them hold and you're holding with them, okay? And then out through the mouth

nice and slow like you're blowing out candles. And you want to make that exhale

about twice as long as the inhale. That's a really good exercise. You do 2 or

3 of those together with your child. You just practice it. You might practice

it after they get up in the morning. You might practice it around lunchtime. You

might practice it again when they go to bed. And this can help them to sleep

better too. But what we're doing is conditioning that brain to start calming

itself. And then after it's been practiced a few times, you can actually

use this as an intervention when their feeling

together." And it could be even just one brief repetition to help calm and get

that chemistry reversed in their brain. The next strategy might take a little

coaching. So, if you need some coaching, reach out to us. We've got coaches that

can have a conversation with you about how to support this process. Here's what

we're going to do: Answer the what-if questions. Part of what causes that sense

asking, "Well, what if this happens? Or what if that happens?" And your kids have a

really great imagination. And so when these what-if questions come up, the

problem isn't so much the question. The problem is the answer. And the answer is

"I can't handle that!" That's why we have to answer the what if.

This is a perceived threat. Not a real threat because the truth is you can

handle it. Think about it. You've handled absolutely

everything so far, haven't you? Your entire life. Why would that be different

for your kids? And mom dad, we got to check our own beliefs about this. Because

if you believe that your child can't handle something, then you will reinforce

the fear. You have to really take a look at that. Can my child handle it if this

feared thing happens? And the answer I think is --of course they can.

They'd have to if it happened. Well, so there's your answer.

All we want to do is get to this answer: "I could handle that." Now, your child might

throw it right up back in your face. "Mom, what if I get lost in the store?" "Oh,

well you can handle that." Okay, now mom, you're probably thinking, "Oh, I don't know

if I could handle that." Well, just check in with that. Could you handle it? Yes, you

could. What would you do? And then you get to have a conversation with your child.

What if you did get lost in the store? "I don't know what I do." Okay, let's get past

the uniform that works there at the store. Typically that's a good choice.

There's also some other fairly safe bets. Like another mother with children. Now,

that's not a guarantee, okay? That's statistically speaking a mother with

children is a very low risk person to approach. So, we have this conversation

with the child. We have to answer the what if. And while we're on this one, you

want to reassure your child. Let me clarify what I mean by that. You are not

to reassure them that the feared thing won't happen. Because you don't know. And

even if you say, "Oh, sweetie. That's not going to happen."

Their little mind is cranking it around and saying, "But it could." And they're

right. So, don't lie to your child and say, "Oh, the feared thing will never happen."

You don't know that. What we want to reassure them of is their ability to

handle it no matter what. And like I said, this might take a little bit of coaching.

So, if you need to reach out to us for that, that's what we're here for. If you

haven't yet connected to the Parenting Power-Up, click on that right now and go

over to get involved on the inside where we can actually join your team. We can

with you. Go down to the description, you'll find all of the links there. We

are honored and excited to be on the inside of your parenting team. 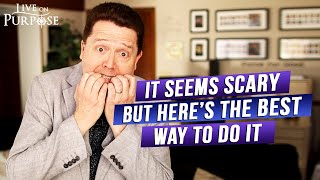 How To Help Child Overcome Fear 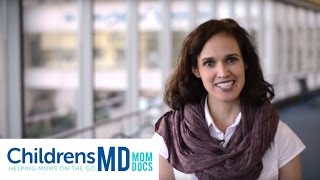 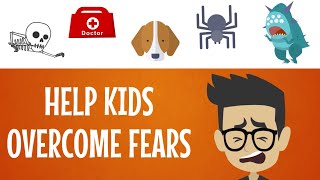 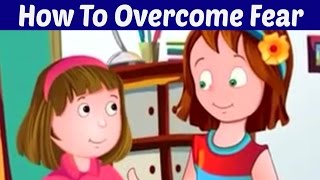 How To Overcome Fear - Best Educational Animation Video For Kids 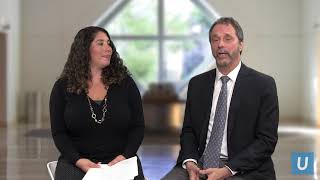 How Parents Can Help With Child Anxiety | UCLA CARES Center 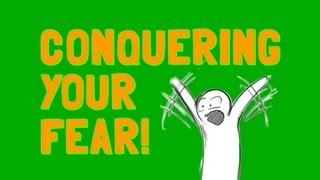 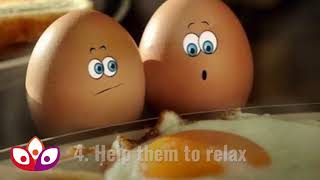 5 ways to help your kids to overcome fear 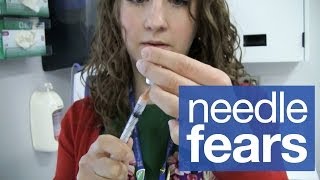 3 ways to manage a fear of needles 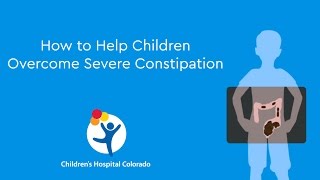 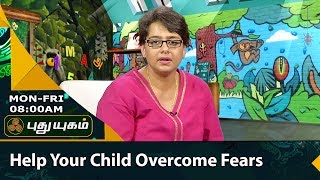