How to charge 12v Motorcycle Battery

to use to keep them up and ready to go. The battery in the simplest form can be

represented by this little unit on the end. This is what they call a lead acid

type battery, and you'll notice that this one is completely empty and it actually

has a vent tube on the side. This is one of the earlier designs and it's still

used in a lot of different machines. Basically at the dealership they will

fill each cell with electrolyte, which happens to be a sulfuric acid for this

type battery, and you bring it up in between these two lines. At that point

they put it under charge. A unit like this? It can withstand a fair amount of

charge amperage going into it. It's a really solid battery but not one that

can stand a lot of vibration and or changes in tilt so to speak. So something

like this would have a difficult time surviving on, let's say a sport bike.

You're going to find this on a lot of utility type machines. It's going to be

in an environment where the machine is more or less stable, not a high

performance, not where space is going to be a concern. And if any of the cells get

low, then you can add distilled water to bring it up to the proper level. Another

characteristic for a conventional battery is it's fairly easy to charge

and it's not really picky about the voltage that comes in. It can withstand

higher voltage than these other types of sealed batteries. Now the one you're

types, one that you actually have to activate yourself with the container of

except it is completely sealed from the factory. Where you're going to find this

battery is in a race type environment, so that's where space is at a premium, where

this thing is going to have to perform at. And there are a few different

variations on these batteries, but for the most part it's very close to one of

these three types. So once again is your conventional,

the AGM where you activate it, and then an AGM that is factory activated. Now the

question is what do we use to charge these and how long should we charge them?

Well let's go back to our conventional type battery. To keep things in a safe

area, the rule of thumb is you want your charge amperage rate to be 10% of what

1.4 amps. That's what you want to charge it at. As far as the charger, this one

does not require that you use what they call a smart charger, so you could

charger like this old unit down at the end of my bench. But be careful with that.

This is not going to know when the battery is charged. It is going to send

that constant current for as long as you leave it plugged in. Even on the lowest

amperage setting, which is 2 amps, it's going to eventually destroy this battery.

Worst case? You plugged it in and put it at the 50 amp start, and probably burn it

up in less than 20 minutes. And I can only recommend using this type of

to get that battery charged to get out on the trail. Now conversely, with the AGM

type batteries, both of them they are very particular about their charging. One,

they don't want to lose their charge, and if they do, they'll sulfate. Second, if you

as it finishes the charge. So what type of charger do you want to use? Well the

opposite of a dumb charger is a smart charger, and there's a lot of them out

there that can get this accomplished. Once again, you don't need a huge charger

per hour. Pretty simple math here, so that would need to charge for... 10 hours.

Pretty simple. Same equation for the YTZ 14. One am per hour, we're wanting to get

to 14 amp hours? Gonna be 14 hours. It's pretty simple to do when you think

about it in terms of 1 amps per hour. Now can you push these other batteries to

two, three, maybe even four amps? Yes. But if you've got the time, let it take the time

so it can get a full charge that first time you activate the battery. It'll last

a lot longer if you start off with a low current charge on the initial charge. Now

the factory activated one, there's only one check that you need to make. This one

should be good to go. They have a long shelf life. What you're looking for here

good to go just like it is it doesn't need to have a top off charge. This

particular charger right here, it'll actually do what they call a quick

per hour. With the quick charge, it can ramp it up to four. And that's helpful if

you're working with some larger batteries. Now if you're only working

with smaller power sports batteries? This is a much better option.

This one charges at one point two five amps, and that's a good middle ground to

get an effective charge going into your battery. This one down on the end? Well,

let me show you what that reminds me of. The one on the end is a breaker bar.

Smart charger is a digital torque wrench. Now both of these accomplish the same

task. They tighten a nut or a bolt but they do it in two very different ways.

This is more like in the caveman approach. This is the new wave digital

age approach where you're going to get an exact readout. Well that's what you're

charger versus a smart one. World of difference: they accomplish the same

thing, but this one does it in a much better, safer, required fashion when we were

dealing with an AGM. Now you don't have to have a calculator in your back pocket

Especially with the Yuasa. They've already got it printed directly to their

batteries, the best amperage and the best length of time to actually charge them

at. So let's take a little closer look at the YTZ. What does it say right here?

amps for one hour. Listen if you need a charger for your machine, why don't you

that has the different chargers that I've shown you here today. Well alright

guys, if you need batteries or chargers for your machine or any other parts for

that matter, why don't you come see us at Partzilla.com and we can get you taken

care of. You have any questions or comments?Leave

them in the section below and I'll do my best to answer. We just want to say thank

you for shopping here with us at Partzilla.com. 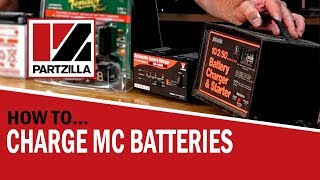 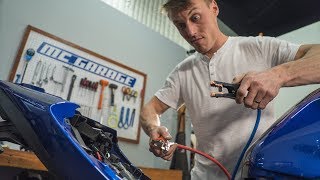 So Your Motorcycle Has a Dead Battery. Now What? | MC Garage 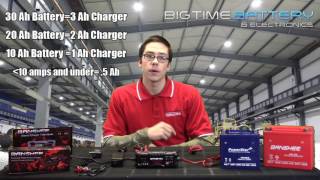 How to Charge a Motorcycle Battery 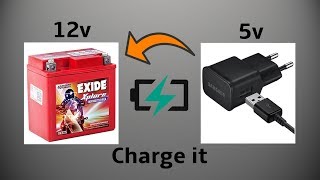 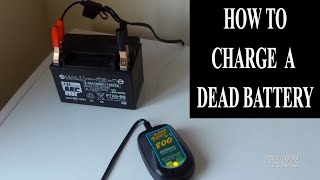 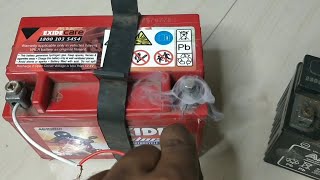 How to charge motorcycle battery at home 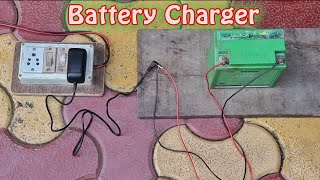 How To Charge Battery At Home 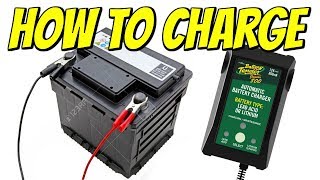 How To Charge A Car or Motorcycle Battery Like A Pro 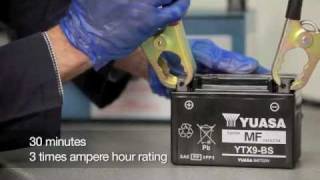 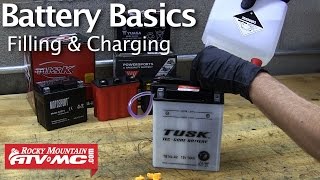