How to bleed Bicycle Brakes

In this video we're going to show you how to bleed a Shimano hydraulic disc brake.

In this instance, we're using one of their lower-level group sets,

the majority of other manufacturers. This is one of those jobs which can seem quite

daunting to the majority of people. When you know what you're doing,

it is relatively simple. Why would you want to do it? Well, if you're getting

reduced braking performance, well, the action of the lever here feels quite

spongy, it might well be you've got some air inside the braking hose here,

and that's when you need to bleed the brakes. But of course, the most important

function of your bike is the braking, so if you're not 100% confident in what

you're doing, we would recommend taking it to a professional bike mechanic.

For this job, you'll simply need a set of Allen keys plus the correct Shimano brake

bleeding kit. Before you start, try to make sure that everything is as clean as

possible. Then you need to get the bleed point of the caliper at the lowest point

of the system so that any trapped air moves upwards. Next use your Allen key to

loosen the brake lever and move it upwards 'til it is roughly level.

Undo the small Allen key bolt on top of the lever, making sure that you keep the

making sure that you don't over-tighten it. Going down to the caliper now,

take off the dust cap. At this point, you might want to remove the wheel to make it

easier to access the brake, but there is no need to on our model.

Take your bleed syringe and fill it with the Shimano hydraulic mineral oil.

Then undo the valve, using your three millimeter Allen key, just one turn

anticlockwise. Put gentle pressure on the syringe and start pumping the fluid

through the cable. You'll see the old fluid appear in the reservoir on top of

the brake lever. As you do it, give the cable a flick to get rid of any air

bubbles. Once the reservoir is almost full, firstly tighten up the valve on the

caliper, then place the provided bung into the reservoir, plug the hole,

then unscrew the reservoir from the lever. Dispose of the old fluid safely,

and then replace the dust cap on the lever. Then back down on the caliper,

pull the hose locking device away and then the hose itself, making sure not to spill

any fluid. Give the whole area a clean and then replace the dust cap on the caliper.

Repeat the same steps for the other brake, again making sure that the bleed point is

the lowest area of the system. On our stand, we can get the bike into the right

position, but if you don't have that luxury, then you may need to remove the 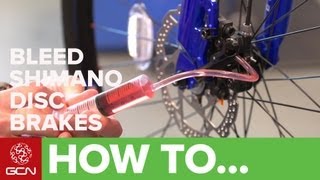 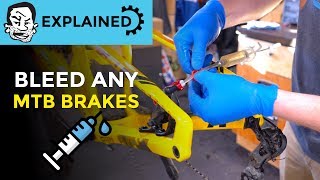 How to bleed MTB brakes 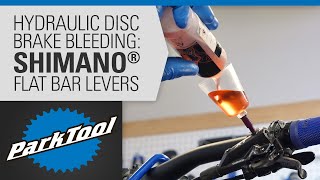 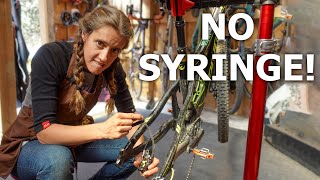 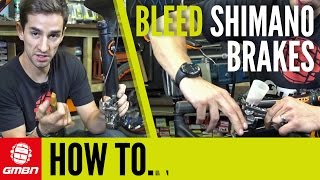 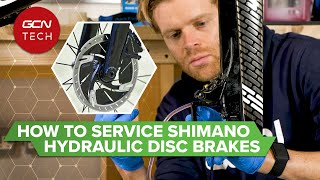 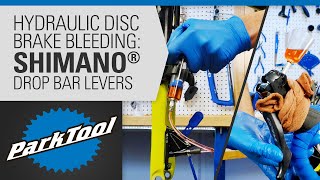 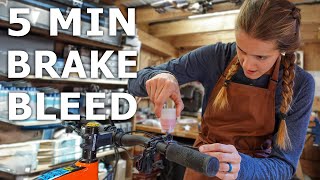 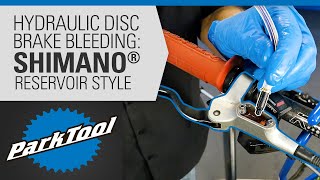 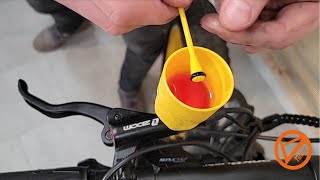