How to avoid
A Moose Attack

What to Do When a Moose Charges You

If the animal is male and mature, it's called a bull.

Females are cows, and both male and female babies are calves.

Yep, I'm talking about the moose!

You read the title of this thing before you clicked on it.

You already knew I wasn’t going to be talking about porcupines.

Moose aren't afraid of us humans, and therefore, don't usually run away at the sight of people.

This fact makes it all the more tempting to approach a moose - to touch, to pet, to feed.

Unfortunately, that can turn out to be a grave mistake.

First let’s clear something up.

Two gooses may be called geese, but two mooses are not called meese.

Nor are they mooses.

Nope, the plural of moose is still moose.

Just so ya know.

But if you provoke one, the consequences can be fatal.

Just like most living beings on this planet, moose will do anything to protect their babies

or their territory once they decide that you're threatening them.

Don't buy into the misconception that because moose look kinda bored and slow, they’re

In fact, you're unlikely to outrun these animals should one of them decide to attack: their

speed can reach 30 miles per hour!

When a moose attacks, it uses both its hoofs and its whole body weight (which can be around

1,300 pounds!) to knock the offender to the ground and crush them.

So, let's say you're enjoying a nice forest walk when suddenly...

Oh my, is that a moose in your path?

Are you supposed to keep walking?

Or is it time to back off?

Watch out for these particular signs: - the moose is staring at you;

- its ears are laid back, and the hair on its neck, hips, and hump is standing on end;

- it lowers its head and starts to walk toward you;

- all the while, it's licking or smacking its lips and clicking its teeth;

- you can see the whites of its eyes; - it urinates all of a sudden; (well I know

that feeling) - not unlike a horse, it whips its head back.

If you see all these signs, or at least several of them, it's a sure sign the moose is about

However, the most dangerous thing about this animal is that occasionally, it may just charge

at you out of the blue, without any warning!

On top of that, there are several seasons when moose tend to be more aggressive than

It happens: - in the winter when animals are starving

and exhausted from trudging through deep snow; - in late spring and early summer when cows

are overprotective of their newborn calves; - and in the fall during the breeding season.

That's when bulls get extremely frantic and competitive.

So hopefully, you'll never have to apply this knowledge, but better safe than sorry.

But what should you do as soon as you realize that a moose isn't going to ignore you, and

an attack is imminent?

- Do NOT try to intimidate or scare the moose - it won't work.

Back off and run as fast as you can.

Try to hide behind the nearest tree, building, or fence that can serve as a barrier between

you and the furious animal.

- If the moose has managed to knock you to the ground, curl up in a tight ball, and it’s

not because he wants to play soccer.

If the animal keeps kicking you or starts stomping, this position will help to protect

your head and other vital organs.

- Don't rush to get up from the ground as soon as it seems like the moose has left.

Wait until it's a good distance away.

If you get to your feet too early, the animal may return and attack you again.

to end up in a situation when it can get aggressive.

And here are some preventative moose safety tips:

- Do NOT approach a moose too closely.

If you want to observe these animals, watch them from a safe distance of at least 50 feet.

- If you meet a moose on a trail, say “hi” – no -- swallow your pride and change directions.

Moose aren't great at stress management; that's why, if they see people coming up too closely,

they may start panicking and can charge.

These animals are quite demanding, and if a moose decides that you haven't shared as

much food as it expected, its anger will be terrifying.

and even harm people who won't feed it in the future.

- If you're walking in the forest with your dog, keep it on a leash.

A moose can mistake your pooch for a wolf and attack it.

- Never walk between a moose mother and her baby.

If you notice you've unwittingly done it, back away immediately!

Maybe it's not too late!

- If you're driving, and a moose decides to cross your path, let it go first.

If you try to go around the animal or move it, the moose is likely to attack your car.

And you shouldn't forget that a mature male can be taller than a horse, and its antlers

usually span for up to 5 feet and weigh more than 65 pounds!

However, the moose is one of the least dangerous (if not provoked) animals you can come across

when walking in the forest.

Things may take a turn for the worse if you encounter, let's say, a bear.

- There are several rules that apply to all kinds of bears.

For example, never come up to a female bear with cubs.

These ladies are mega-protective of their little ones, and are much more likely to attack

- Show the bear that you're not prey.

Come to think if it, praying might be a good idea!

But in either case, do NOT make any high-pitched noises and don't scream - you might agitate

the bear even more.

If you wave your arms, do it slowly.

If you decide to talk some sense into the bear, do it in a calm and low voice.

If you know what exactly you would say to the bear, tell me about down in the comments.

- Without taking your eyes off the bear, start to move sideways, it’ll keep you from tripping

Don’t rush or run away.

Although, at first sight, bears may look clumsy and heavy-footed, they're surprisingly good

But what makes matters even worse is these animals love chasing their prey.

That's why, if a bear charges after you, stop moving altogether.

If the animal you've met is a brown bear (meaning it has brown fur, an impressive size, and

a prominent lump between its shoulders), play dead.

Drop to the ground on your stomach, cover your neck with your hands, and spread your

legs apart - this way, it’ll be hard for the bear to flip you over.

Don't get up until the bear loses interest and leaves.

If it doesn't, grab the nearest branch or rock and attack the bear yourself, repeatedly

hitting it in the face.

- But if you encounter a black bear, playing dead won't help you.

In this case, find shelter in some building or a car.

If there are no hiding places nearby, grab some heavy object and repeatedly hit the bear

If you've encountered a wolf or a wild cat, - try to make yourself look larger to intimidate

Open your jacket, wave your hands, or jump up and down.

- Like with bears, don't scream or make high-pitched noises.

If you have to speak, use a low, confident voice.

- Never turn your back to the animal or run.

While keeping eye contact with the animal, slowly back away.

- Do NOT bend over or crouch down, even if you need to pick something up.

Otherwise, wolves and wild cats will assume that you're weak, small, and not threatening.

If you're with kids, try to pick them up without lowering your body.

- If you can reach a rock or a branch without having to bend over, throw it in the direction

of the animal to scare it away.

- If the animal charges at you, do your best to remain standing, and use any heavy object

you can find to fend the animal off until it flees.

So there you have it, mooses and wolves and bears, oh my…

Finally, my favorite kind of moose is actually Chocolate.

Give it a shot.

Have you ever encountered a chocolate mousse or a real moose, or any other wild animal?

Write about your experience down in the comments!

If you learned something new today, then hey -- give this video a like and share it with

But don't go moussing your hair just yet!

All you have to do is pick the left or right video, click on it, and enjoy!

Remember: Stay on the Bright Side of life! 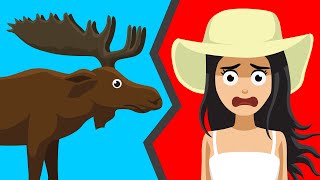 What to Do When a Moose Charges You 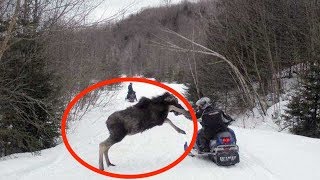 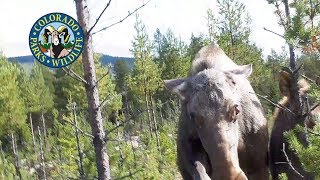 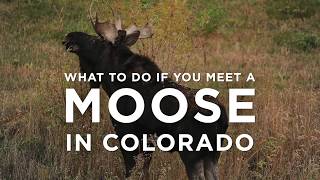 What to do if you meet a moose 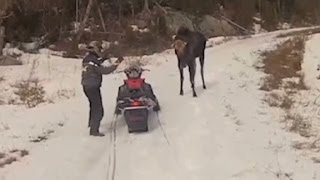 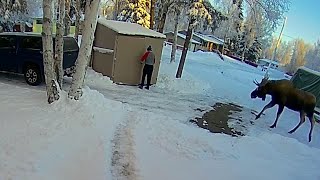 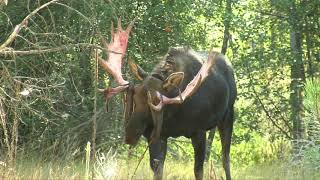 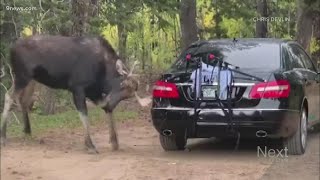 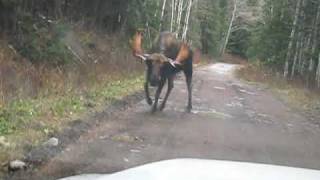